OUR MEDIA CONSULTANT HAS PASSED AWAY. :

As our media consultant, Mike was very excited to work with us on the Allen County War Memorial. Before Mike died, I told him 2 acres has been provided on which to build the memorial.  He immediately began thinking up  a media presentation for a news release and a promotional video.  Unfortunately he was not able to put it together before this horrible accident. The news we shared with Mike over a month before he passed:..... He would want you all to know. 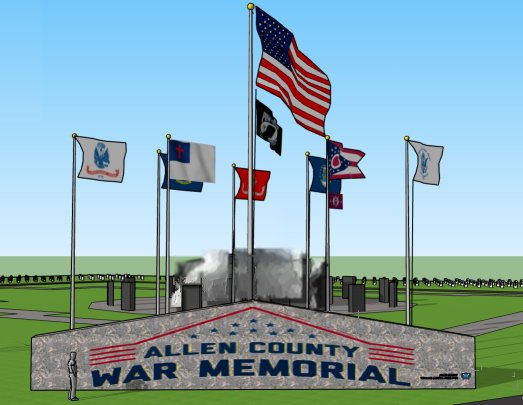 We have some exciting news to share with all of you. Two acres of ground in a very visible and high traffic area has been provided to the Allen County Veterans Memorial Foundation on which to build the Allen County War Memorial. The location of the site will be announced on a date mutually agreed upon by the donor and the Foundation.

This is a major development in our mission to build the memorial. We have also met with an architect in the Washington D.C. Area to begin the design process.


The image in this post is "not" a design image of the memorial. Mike, My brother-in-law, and dear friend,  passed away at 2100 Sunday Evening March 13,  2016 while surrounded by his wife and children.

To all of you co-workers and other friends of Mike, my brother-in-law. He spoke affectionately of all of you. As I read your comments, though we never met, I recognize the names of many of you that Mike really enjoyed working with. Thank you for your kind words about Mike. Mike had wished he served in the military so to do what he could, he did far more than put a "support our troops" ribbon on his car. He was a great hands on supporter of the Allen County Veterans Memorial Foundation as our media consultant. The guy to "tell us how to tell it"  Always encouraging me in our quest to build the Allen County War Memorial.

https://www.facebook.com/michael.g.bowersock
And we know that all things work together for good to them that love God, to them who are the called according to his purpose.

For those of you interested in spiritual comfort --I am providing this link to our church web site daily devotional page.
Daily Devotionals - Immanuel Baptist Church

1 To every thing there is a season, and a time to every purpose under the heaven:

9 What profit hath he that worketh in that wherein he laboureth?

10 I have seen the travail, which God hath given to the sons of men to be exercised in it.

11 He hath made every thing beautiful in his time: also he hath set the world in their heart, so that no man can find out the work that God maketh from the beginning to the end.

Mike Bowersock is now working as the civilian Public Affairs Officer for the Ohio National Guard.

Mike returns to WCMH-TV after working at the station from 1989 to 1994. He came back to Columbus after spending the past two years as a reporter for WXYZ-TV in Detroit. He also worked at WWJ/WKBD-TV in Detroit from 1994 to 2002.

Mike has been honored with four Emmys, five awards from The Associated Press, two from the Society of Professional Journalists, and one each from the Michigan Association of Broadcasters, the Detroit-Windsor Metropolitan Christian Council and the Detroit Free Press. He was named the Best Street Reporter by the Free Press in 2000.

He said the most memorable event he covered was the Gulf War. While at NBC4, Mike and photojournalist Ronnie Clark entered Kuwait at the end of the war.

"Hardly a week passes that I still don't think about it," he said.

In February 2011 Mike and photojournalist Andrew Banks were embedded with an Ohio National Guard unit in Afghanistan. They highlighted the efforts of the unit in charge of clearing the routes in Paktika Province near the Pakistan border.

Mike received a Bachelor of Arts degree in journalism from The Ohio State University. He recently earned his MBA at Franklin University.

He currently lives in Dublin with his wife and four children.

Mike currently serves on the Franklin University MBA Advisory Board, as the group is rebuilding their MBA program from the ground up.

Mike said he has wanted to work in the TV industry since he was 6 and that he can't imagine working in any other field.

He said his first job was working for his father at his garage/Sohio station in Lima.

"I started working for him when I was about 10, and was working on cars by age 12," Mike said.

Judy Stein
Mike Bowersock
I knew Mike as a journalism student at Ohio State. He also worked in the School office as a work-study student. He was a hard worker and all-around nice guy. I have followed Mike's career over the years, and was especially pleased when he returned to Columbus to work for NBC4. It was so good to see him doing what he really loved--reporting the news. Mike will be truly missed by all. My sincere condolences go out to Mike's in a loss that came too soon.
Thursday, 17 March 2016
Show entry
Cora Gumm
Mike Bowersock
I'm a tv 4 news viewer & even when not paying particular attention, when announcement was made that Mike Bowersock was reporting next, I always made sure to listen. I loved to hear him tell his stories. You could sense they were heartfelt & that he gave the story his utmost attention. I admired him greatly & I could sense that he was someone who would be nice to know on a personal basis. My heart goes out to his family & friends. My prayers are that God will comfort your hearts as only He can in the weeks, months & years ahead.
Tuesday, 15 March 2016
Show entry
Bill Bruff
One of the Best
Mike was one of the best people I had the fortunate privilege to have worked with at WXYZ-TV Funny, witty and most of all a great story teller. You will be missed my friend.
Tuesday, 15 March 2016
Show entry
Tom Brockman
Heartbroken Loss
I am heartbroken over Mike's untimely death. I worked with Mike for five years at NBC4. My desk was right next to his. No one could get me to laugh as hard as he could - such a kind, gentle and funny soul. My heart weeps for his wife and children - They meant the world to him. Mike didn't know it, but he served as a mentor to me when I arrived at WCMH as a young, energetic, and, I'm sure, annoying reporter. He continued to serve as a mentor throughout my time there and beyond. It's impossible to recall a memory that involves Mike and not smile. Mike has left a profound imprint on all of our lives. I'll miss you, buddy...
Tuesday, 15 March 2016
Show entry
Christinia and family
My Condolences
My thoughts are with his family and friends. I grew up watching Mr Bowersock on the news and his very special ventures he did. He will be deeply missed. His wife, kids, close family and friends you will be in my prayers. God Bless You. R.IP Mr Bowersock
Tuesday, 15 March 2016
Show entry
Mary Humphrey
sorrow for your loss
I have always been a fan of Mike. His news stories had his own personal touch. He will be missed by many of his fans here in Columbus. His family and friends will be in our prayers.
Monday, 14 March 2016
Show entry
Jevon Mitchell
My condolences
My condolences to the family. I was so use to watching Mike do his broadcasting. He will be sadly missed.
Monday, 14 March 2016
Show entry
Terri Swartout
Mike Bowersock
I worked with Mike at WKBD in Michigan. I always admired Mike's storytelling talents and great sense of humor. As a co-worker one thing that you knew about Mike was how much he loved his family! At this difficult time it is his family I pray for. Lord please guide his family through these tough days.
Monday, 14 March 2016
Show entry
Pam Brown
Prayers for Mike's Family
I didn't know Mike but enjoyed his work. I hope that their wonderful memories will help his family during this difficult time.
Monday, 14 March 2016
Show entry