Flags were lowered to half staff at Memorial Park in Harrod on Saturday August 12 at the start of dedication ceremonies honoring four Ohio sailors — including one from Lima — who died aboard the USS Frank E. Evans in a 1969 accident.

There were "over" 250 People in attendence. A memorial dedicated to the memory of four Ohio sailors who were among 74 seamen to perish aboard the USS Frank E. Evans in 1969 was dedicated Saturday morning during an at-times emotional, two-hour ceremony.
The small Allen County village was selected as the Ohio site of the memorial honoring the four servicemen from the Buckeye State who died when the naval destroyer sunk in the South China Sea on June 3, 1969. Harrod was selected, in part, because one of those four men was a Lima resident. Larry Allen Gracely, a 1965 graduate of Shawnee High School, was a 20-year-old sonar technician aboard the USS Evans when it was struck by an Australian aircraft carrier in the South China Sea during friendly wartime exercises. The USS Evans broke in half and sunk after the collision, killing Gracely and 73 more of the 278 sailors aboard.
The ships, along with vessels from other allies, were gathered in Southeast Asia during the Vietnam War to give support to U.S. ground forces in the region when the tragedy occurred.
Several survivors of that horrific incident were in Harrod on Saturday, joined by other military veterans, area dignitaries and family members of the Ohio men who died aboard the USS Frank E. Evans. They gathered to dedicate a new memorial in Harrod Veterans Memorial Park that will allow the names and memory of the four servicemen to live on in perpetuity. David Paxton, co-founder (along with his wife, Kathleen) of the Allen County Veterans Memorial Foundation, welcomed the large crowd to Harrod and told how the memorial came to be located in the Allen County community. He said Dean Wyse, an Ohio survivor of the USS Evans tragedy, had been looking for a location for an Ohio memorial.
Wyse is a member of the USS Frank E. Evans (DD 754) Association, a group formed in 1992 that has helped establish memorials in more than a dozen other states. The 74 seamen who perished were from 28 states.
Wyse said several Ohio locations were considered, but it was during a visit to Harrod during the community’s Pork Rind Festival that “we felt this was the proper place for an Ohio memorial.”
Survivors of the incident aboard the USS Evans came from as far away as Oregon and Georgia to attend Saturday’s ceremonies. Terry Vejr said he has traveled from his home in Portland, Oregon, to attend eight similar ceremonies.
Jack Wimsett, of Garfield Heights, also survived the 1969 tragedy.
“Why am I here today? Because of my buddies. I’ve got to pay my respects to the ones we lost,” Winsett said. “Do I have bad memories? I sure do. Every day. I just can’t get rid of them.” 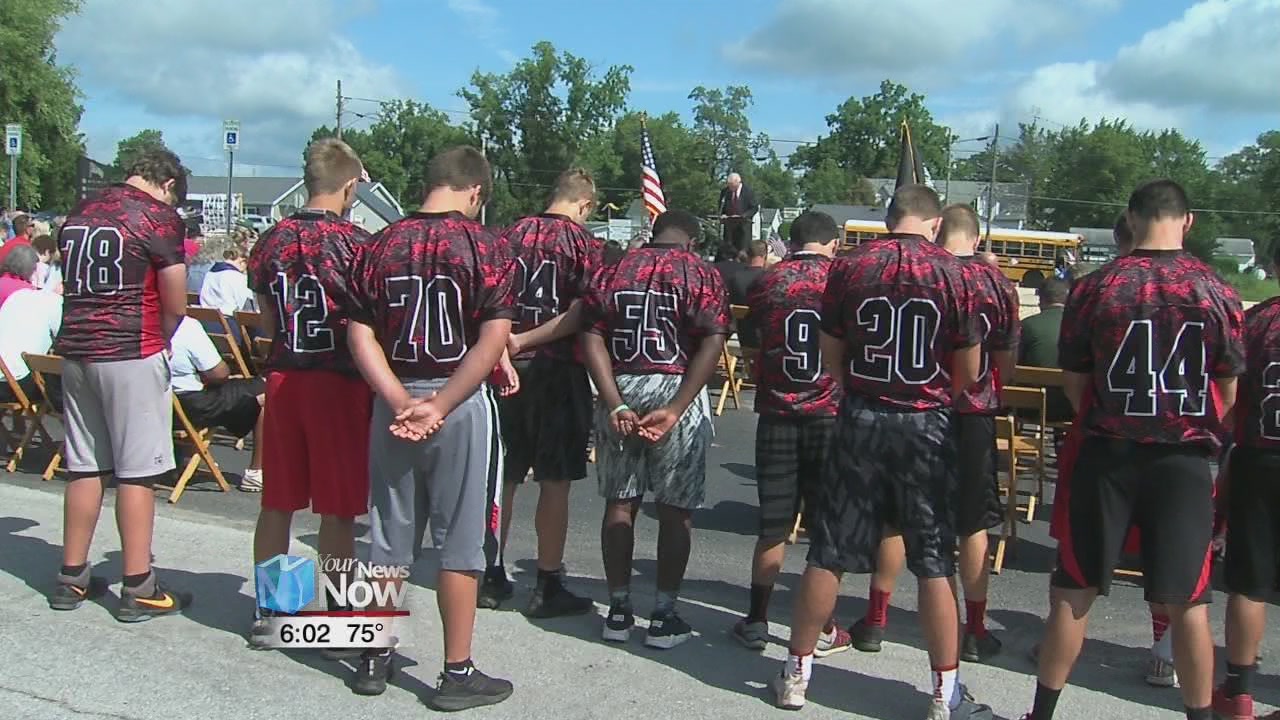 Also in attendance at Saturday’s ceremony was this season’s entire varsity football team from Shawnee High School. Their presence was a tribute to Gracely, who wore No. 54 during his playing career at Shawnee. The Gracely Award is presented annually to one Shawnee football standout.
Speaking on behalf of a dozen members of the Shawnee High School Class of 1965, John Robinson said of Gracely, “We will always remember his laugh … his smiling face.”
Shortly after Gracely had joined the Navy, Robinson remembers asking him, “Why?”
“He said he felt he needed to be there,” Robinson said. “Thank you, Larry, and God bless you.”
Among the dignitaries speaking Saturday was Ohio 4th District Congressman Jim Jordan, who said it is “always appropriate to honor service, sacrifice and heroes.” Jordan said the U.S. military “has always stood for freedom, for countless people around the world.”
Several speakers at the dedication noted that the names of the 74 sailors who died aboard the USS Evans are not listed on the Vietnam Memorial Wall in Washington, D.C. They apparently have been deemed ineligible for inclusion on the wall “because they were killed outside a designated combat zone,” according to literature distributed at the dedication. Members of the USS Frank E. Evans (DD 754) Association said they will continue to fight to have those names included on the Vietnam Memorial. Martha (Sauvey) Leutz (Lights)  "This is my brother"

Part One - Opening  through Ode to the Fallen: John Coffey

Part Three  "History of the Ship and The Collision: John Coffey"

TRANSFER OF MONUMENT TO THE VILLAGE:

Part Six "Unvieling of monument to end of ceremony"   We will add the transfer of the monument to this segment and  split this section into two segments at a later date.

For more information about the Ship and her crew visit the Ships web site at http://ussfee.org  (opens new window or tab)

Do you, Mr Tony Blake As representative the Village of Harrod, Ohio, accept the receipt of the USS Frank E. Evans Ohio Memorial Monument with the understanding the responsibility that naturally comes with the ownership of said monument to have the monument installed, cared for and on public display on village owned property in the Harrod Veterans Memorial Park and any other responsibilities which would naturally be expected in regards to ownership of this memorial with the understanding that this monument may be re-located at the discretion of the U.S.S. Frank E. Evans DD-754 Association if the monument is not displayed or properly cared for?

- Responded “AS GOD IS MY WITNESS”