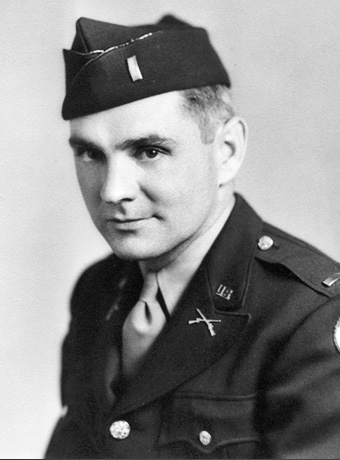 The following was posted on Honor States on 03.30.18  https://www.honorstates.org/index.php?id=109220
1st Lieutenant Ralph "Frosty" Brennan, commanding officer of F Company, 2nd Battalion, 134th Regiment, 35th Infantry Division, was waiting with his battalion on the banks of the Moselle River, near Flavigny France. Lt. Brennan had only been back at the front for two days, having finally recovered from the wounds he suffered in July in a fierce battle at St. Lo. For his service, he'd received a purple heart. .. The 134th Regiment had been in daily contact with the Germans since they landed on Omaha Beach on July 5, and Lt. Brennan knew that enemy contact was imminent on this day as well. He could sense, and occasionally hear, the Germans encamped across the river. The previous night, Lt. Brennan and his Catholic brothers in arms had gone to confession and communion in preparation for what was to come. It was a singular moment of peace and serenity before the events of the next day would bring hell raining down upon them. .. That afternoon, the order was given. The 2nd Battalion would seize the only remaining bridge crossing the Moselle River. The 1st and 3rd Battalions would follow, and tanks would arrive to cross the bridge after them. Together, they would overwhelm the Germans. At about 7:30 p.m. Lt. Brennan passed his good friend Father William Hayes, and flashed a smile, as he walked with his men towards the bridge. As they began to cross, there was little resistance from the Germans until the men of the 2nd battalion had crossed over to the enemy side. There, they waited for the 1st and 3rd battalions and the tanks that never arrived. Around midnight, the Germans let loose with artillery fire. They managed to blow up the bridge, thus stranding the men. There was now no escape for the 2nd brigade, and countless numbers of American soldiers were killed. Later, amidst the chaos, a fellow soldier found Lt. Brennan near the bridge, mortally wounded, and offered him a cigarette. .. The next morning it was clear. Only 295 of the original 1900 men of the 2nd battalion had survived. Company F was "pretty much lost" according to (then) Major Frederick Roecker, Commander of the 2nd Battalion, 134th Infantry Regiment at the time of the battle. But what at first seemed like a futile effort, actually paved the way for an allied victory. For the incident at Flavigny had proved to be a diversion, allowing the allies to liberate the nearby German-occupied town of Nancy just a few days later. .. Lt. Brennan died of his wounds on September 12, and is buried in the Lorraine Cemetery at St. Avoid, France. He was 32 years old. Two years after his death, someone from the family of Ralph Brennan, probably his brother, Father Bob, requested permission to carve a cross in Ralph's memory into the bridge at Flavigny. The cross remained there for decades, and over time, the locals forgot its meaning. Eventually, the son of a former Mayor of the village remembered hearing of a Lt. Brennan whose family was responsible for the carving of the cross. For years, historians near Nancy, France, searched for the family of Lt. Brennan. They asked for help from an American woman named Paula Evans Baker, a member of the 35th Division Association. Paula’s father had also died near Nancy, France, just two weeks after Ralph’s death. She searched for family members and finally received a phone call from Kathy Brennan, who had also been searching for information regarding her great uncle. .. In 1998, a new bronze cross and commemorative plaque were unveiled on the bridge honoring the "memory of Lt. Ralph T. Brennan and his comrades of the 35th American Infantry Division."