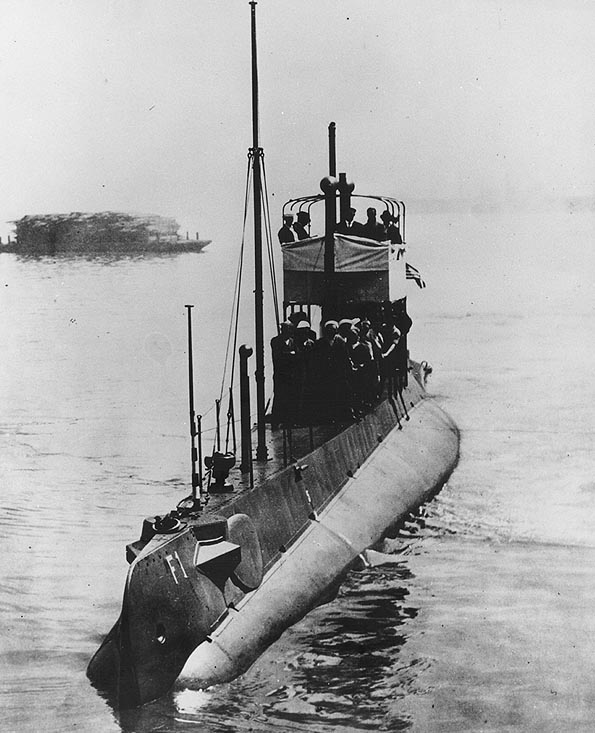 On 17 December 1917, USS F-1 (SS-20) and USS F-3 (SS-22), both running on the surface, collided during exercises off San Diego, California. F-3 gouged a giant hole in her sister ship’s port side and F-1 sank beneath the waves in just ten seconds, taking 19 of her 24 crewmen to the bottom with her. Given the depth of the water—nearly 1,500 feet—and the lack of any viable submarine-recovery technology, no attempt was made to locate the wreck. Nearly 60 years later her location finally came to life, as described in the following newspaper article, “Sunken Sub Found by Navy.”
“A World War I U.S. submarine that sank in 1,439 feet of water about 4 ½ miles off La Jolla in 1917 has been found by a Navy deep submersible rescue vehicle.
“ ‘It looked like a big ax had hit her,’ said Lt. Dave Magyar, who took the DSRV2 down off the coast Oct. 24 [1976] and saw the submarine F1 ‘intact.’
“Capt. Willard Johnson, commander of Submarine Development Group I, told newsmen yesterday that the submarine was seen after initial contact was made by sonar on Oct. 22.
“He said the sonar contact was made by the Navy oceanographic research ship DeSteiguer, which was attempting to find an F4 Phantom jet fighter that crashed in 1972.
“…The 142-foot, 330-ton sub settled to the bottom on its right side, pointing about west, northwest.
“Magyar showed several color slides that he took of the submarine. A 10-ft. by 3-ft. hole in the side was visible.
“He said the only apparent damage to the sub was that caused by the collision and through corrosion over the years.
“Magyar said he landed the DSRV on the side of the F1 and looked inside.
“ ‘It will remain the grave of 19 men,’ said Johnson. ‘There is no reason at this time to bring it up.’ ”

By Education Specialist on Wednesday, 8 January 2014 at 8:00 am
Posted in Submarine History | No Comments »