He was the uncle I never met. Charles H. Carolus was born in Lima Aug. 8, 1913, the sixth of 12 children of Milo and Bertha Carolus and big brother by 11 years to my father, Don Carolus. He was 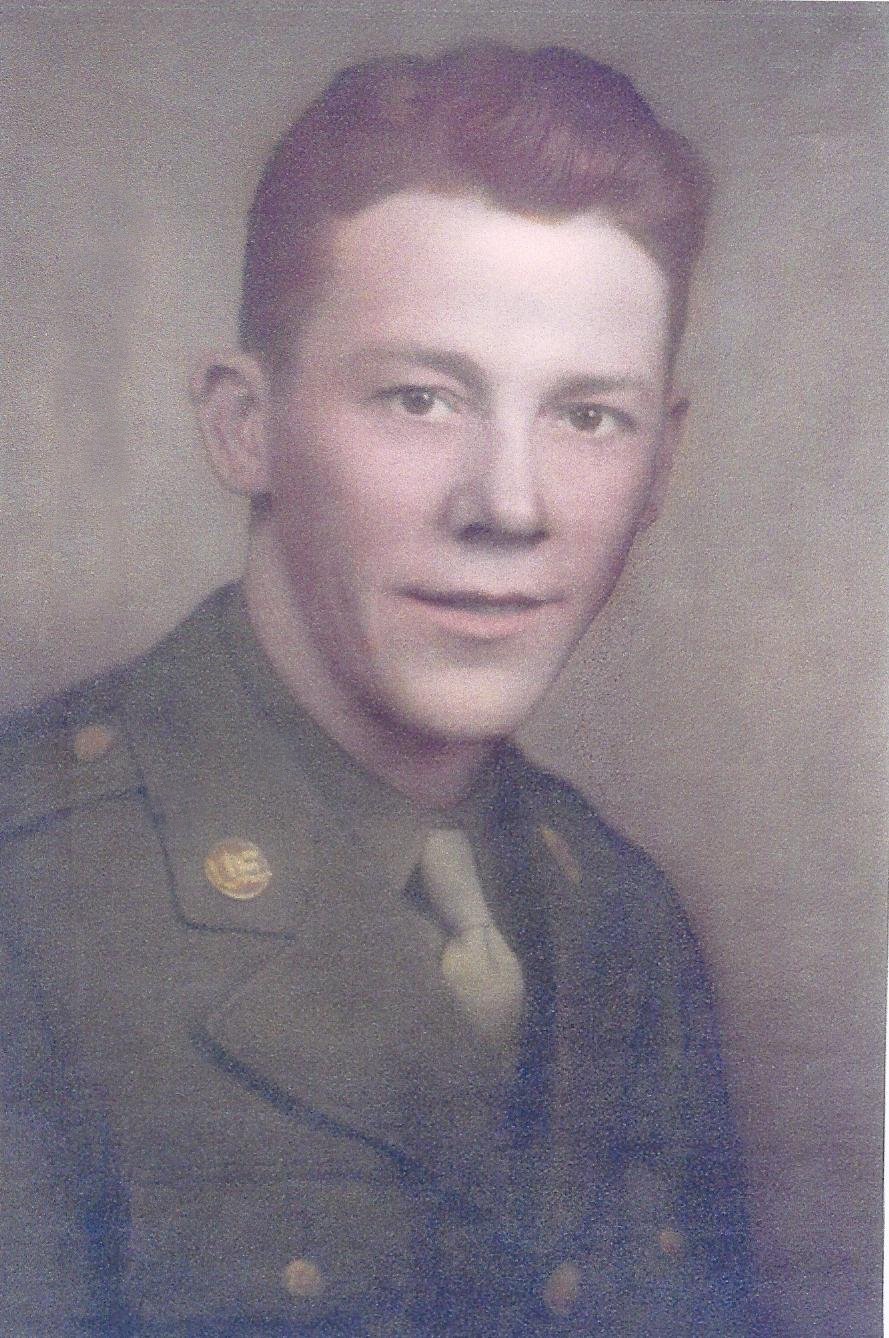 spoken of often with great admiration by my dad. All I really knew of him was that he had died in World War II somewhere in the Philippines and that my father had loved him dearly. So one day I began to look into who my Uncle Charles Carolus was.

In 1943 as World War II was raging across the world, a relatively “old” Charles found himself drafted into the Army at the age of 29. At the time he was working as a physical therapy technician and was also manager of the Goodsell Brothers Paper Store in Findlay, where he lived with his young wife, Jennie (Gawn) Carolus. Charles and Jennie were building a life together and as yet had no children.

Following basic training at Camp Gordon, Georgia, and Fort Sill, Oklahoma, Charles was stationed in the hard fought Pacific Theater and was assigned as a forward observer. His job was to scout out the enemy, determine their location, and radio to American air support who would then drop bombs onto enemy locations. Being point, Corporal Charles Carolus was in great danger doing his job, but he never was seriously injured. The war progressed, and Charles transferred in early 1945 to the 472nd Glider Field Artillery Battalion, 11th Airborne Division where he volunteered to become one of the daring and elite new cowboys of the air, a glider pilot.

Activated Feb. 25, 1943, under the command of Major General Joseph M. Swing, the 11th Airborne Glider Division was born of a need to counter the hard fought foe in the Pacific and European Theaters. It was a small division, only half the size of a standard infantry division in men and firepower, but one that took on dangerous missions with heart and courage. There were only about 6,000 American military glider pilots, all volunteers. They proudly wore silver wings with the letter “G” superimposed on them, indicating that they were glider pilots only. However, the high-spirited glider pilots were not a bit reserved about letting everyone know that the “G” stood for “guts.”

The glider pilots truly were cowboys of the sky as they were towed and bounced violently on an 11/16 inch thick nylon rope in their motorless fabric-covered aircraft 350 feet behind a C-47 tow plane. Once released from the tow craft near the front, they were to land on any convenient open terrain close to their objective, hopefully with as little damage to the cargo and crew as possible. Most landing zones were far from ideal. Each flight of a military glider into enemy territory was a one-way mission to deliver men and/or supplies behind enemy lines. The one-way nature of the missions meant that they were treated as disposable, which is why they were constructed from common and inexpensive materials such as wood.

The CG-4A (C for Cargo and G for Glider) was not designed to be a thing of beauty, and certainly it was not considered to be an attractive aircraft. Most Air Force regular pilots joked about its appearance but few of them poked any funny remarks at the guys who flew them. It could carry its own weight of 3,750 pounds which meant it could transport a quarter-ton truck (Jeep), or a quarter-ton trailer fully loaded with combat, medical or radio equipment, or a 75 mm Howitzer, or a 37 mm anti-tank gun, or 57mm anti-tank gun, or a specially designed airborne bulldozer for runway construction.

The beauty of gliders was that, once released at some distance from the actual target, they were effectively silent and difficult for the enemy to identify. The danger was that each landing was more like a controlled crash onto rough and unprepared terrain. They were also defenseless. Those piloting or riding in the planes suffered high casualties as a result of anti-aircraft flak, bad weather, tree limbs and other hazards on the ground. In short, it was among the more dangerous jobs in the war. Glider pilot and glider-rider casualties were estimated at 40 percent for some missions.

American glider pilots, along with other airborne forces, were deeply involved in all the major invasions of World War II, including Sicily, Normandy, Southern France, Holland, Bastogne, The Rhine Crossing, Luzon and Burma. Immediately after being activated, the 11th Airborne Division began intensive training of gliders and their pilots in the states in anticipation of their role in the South Pacific. In early 1944 the “Angels” were on the move and upon arrival to New Guinea began five months of even more intensive training cycle to learn jungle warfare in preparation for an invasion of the Philippines.

In January 1945 the 11th Airborne landed at Nasgubu Beach, Luzon, Philippines about 70 miles from the capital city of Manila. Their mission was to clear all enemy opposition from a major highway and link up with the Allied forces attacking Manila. Within five days the 11th Airborne had managed to eliminate all enemy resistance along Highway 17 and had broken the main line of enemy resistance.

Another daring raid some 25 miles behind enemy lines came Feb. 23, 1945, when the 188th Glider Infantry Regiment, part of the 11th Airborne Division, in conjunction with local Filipino guerrilla task forces, located and liberated 2,147 Allied POWs from the Los Baños Internment Camp. The second precisely-executed raid by combined U.S.-Filipino forces within a month, it has been celebrated as one of the most successful rescue operations in modern military history. The outstanding success of the Los Baños raid incorporated many tactics that revolutionized generations of future special military operations.

In May 1945 the 11th Airborne moved to a reserve area in the Philippines to rest, re-group and take in new troops. Here they began preparing for their next big assignment: Operation Olympic, the invasion of the Japanese home islands. At the same time, in the European Theater, American glider pilots were preparing for Operation Eclipse, the Allied Airborne offensive plan to capture Berlin.

Early on the morning of July 20, 1945, while on a training exercise in preparation for Operation Olympic, my uncle lost his life at the age of 31 when heavy weather set in and a second glider collided with the one he was piloting over the suburb of Parauaque, Luzon. There were six other young men onboard Charles’ glider that morning and an unknown number on the second. All souls aboard both gliders died instantly when they crashed to the ground.

In a letter sent to Jennie Carolus by Charles’ commanding officer it was stated that a funeral was held that very afternoon at the US Air Force cemetery in Manila. The next day, July 21, 1945, a memorial service was held in the battalion chapel with the entire battalion attending.

Another letter of sympathy was sent to Jennie from one of Charles’ good friends which stated, “I have always believed that the true test of any man is not how many material things or how much wealth he possesses but rather how many real and worthwhile friends he can call his own. Charley had a host of these … everyone who met him … and not a single enemy. His passing has left an emptiness for all of us and they all express their sympathy.”

Charles was buried in a beautifully located Army cemetery near Manila. After the war ended his remains were returned to Lima and interred in Shawnee Cemetery, his final resting place. Charles’ widow, Jennie, eventually re-married a man by the name of Zieroff who owned a clothing store in Findlay. Sadly, the Carolus family lost track of Jennie, but my dad has always spoken highly of her and often wonders about how her life went after losing Charles.

The plans to invade Japan and take Berlin (Operations Olympic and Eclipse) were canceled after the Japanese surrendered in August 1945 following the atomic bomb drop on Hiroshima.

World War II glider pilots suffered heavy casualties and their ranks now have thinned to the point that very few of these heroes remain with us today. They are a vanishing breed never seen before in the history of American military and there will be no future generations of American military glider pilots. Following the end of the war, the glider program in the Pacific continued in Japan on a former Japanese air base outside Sendai. The division opened an airborne jump school at Yamoto, Japan, and, according to writings sent to my father, they named it Carolus Field in honor of Corporal Charles H. Carolus. The men of the 11th Airborne Division remained in Japan on duty until 1949 when they were relieved and sent back to the States to Camp Campbell, Kentucky. In 1952 the Defense Department discontinued the military’s glider program. American glider pilots were immortalized in a 2007 film narrated by Hal Holbrook entitled “Silent Wings: The American Glider Pilots of WWII,” available on DVD and on YouTube.

The National World War II Gliders Pilots Association has its headquarters at 4037 Ringdove Way, Roanoke, Texas. The Silent Wings Museum in Lubbock, Texas, opened in October 2002 at the Lubbock International Airport. This museum houses a collection of over 9,000 items, not including photographs and documents, preserving the memory of the brave glider pilots of World War II. Within the museum, photos, timelines and interactive exhibits allow visitors to learn about the development of the military glider program and the numerous campaigns they were so instrumental in during World War II.